“The Beginning and The End”

Alpha and Omega are the first and last letters of the Greek alphabet. The New Testament of the Bible was written in Koine Greek which was the common language of the Eastern Mediteranean area at the time.  Later, after the Romans conquered the area, Koine Greek remained the dominant language.  It is considered to be an expressive and very precise language.

Interestingly, among the Jewish rabbis, it was common to use the first and the last letters of the Hebrew alphabet to denote the whole of anything.  The Hebrew word emet means “truth”.  In Hebrew, it is spelled aleph, mem, tav (אֶמֶת). It is significant that these letters are the first, middle, and last letters of the Hebrew alphabet.  Again we see the concept of beginning and end, encompassing all things.

In Isaiah 44:6, we see God Himself say,
“Thus says the Lord, the King of Israel
and his Redeemer, the Lord of hosts:
‘I am the first and I am the last;
besides me there is no god.'”

John, in the his writings  makes certain that there is no doubt that Jesus is the Lord of the Old Testament.  Indeed, He is  the first and the last prophesized by Isaiah.  From beginning to end, Jesus has always existed and always will exist. This is an attribute unique to God, meaning Jesus equates Himself with the eternal God the Father.

In the opening verses of his Gospel, John calls Jesus “The Word”.  (John 1:1-5).  He is not just any word, He is THE Word of God.  Words are made of letters and Jesus is The Alpha and The Omega. In the  contxt of the Hebrew emet,  Jesus  is “the Way, the Truth, and the Life” as He, Himself,  declared in John 14:6. Paul tells all in Colossians 1:16-17 “For by him all things were created, in heaven and on earth, visible and invisible, whether thrones or dominions or rulers or authorities—all things were created through him and for him.  And he is before all things, and in him all things hold together. ” Colossians 3:1 says “Christ is all, and in all.”

Scripture with Alpha and Omega

ESV: “I am the Alpha and the Omega,” says the Lord God, “who is and who was and who is to come, the Almighty.”

Prayer to Alpha and Omega

Lord, You are Alpha and Omega. As I think of that I am amazed and I am comforted.

You are the Beginning and the End. You know all that has been and will be. You know me fully. You know my needs. I know my wants. May I never presume to know more than You.

I trust You with my life and all things. From A to Z, You know all. I trust Your Truth.
Amen 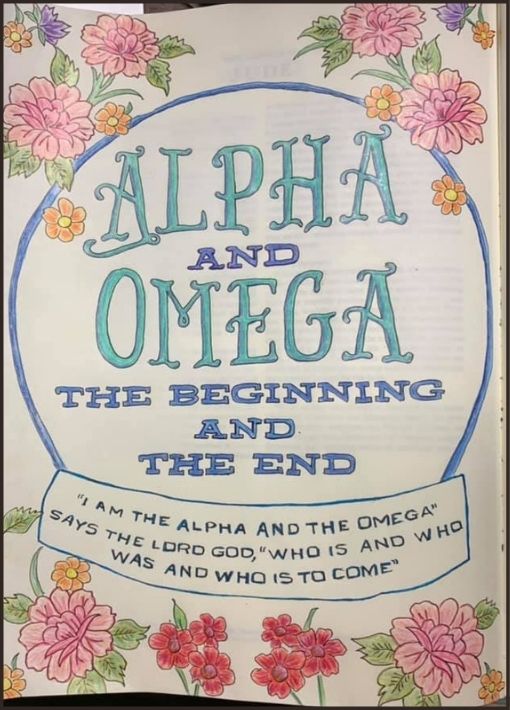 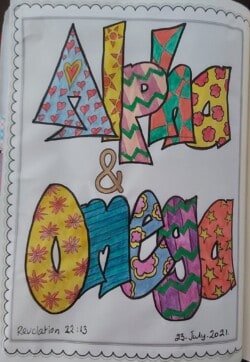 will be coming soon.  Please check back here later to download and print.

The “Many Names of God” Blog (aka NOG Blog) is provided by Creative Bible Journaling, specifically as a tool for members to enhance their bible knowledge and their journaling experience. Research was accomplished by Joan Fudala, with the use of 27 different resources, both online and physical. The traced images she used throughout this blog are from the adult coloring book, “Color the Names of God”, with artwork by Marie Michaels.

All content was compiled and formatted by Susan Stump and Lorraine Szontagh. The black and white printables were drawn by Jill Briscoe. Any videos will be courtesied who/when/where posted.

We have done our best to provide accurate information, but translations, meanings and variety of resources may occasionally disagree. CBJ takes no responsibility for inaccurate information found on the internet. No monies have been exchanged for A) use of anyone’s intellectual content and/or B) viewing any content/blog posts on the CBJ website.

Shop with CBJ and ChristianBook
Just click on any of the ads links below.

The Names of God By Ann Spangler A 52-week workbook study focusing on the names of God and Jesus. Provides background information, key Scriptures, questions, and a brief list of passages for further study.

Color the Bible 3-in-1: An Adult Coloring Book for Your Soul Harvest House Publishers   3-in-1 coloring book featuring soothing drawings from Color the Psalms, Color Your Blessings, and Color the Names of God. 120 pages

Praying Through the Names of God Soft Cover, Tony Evans Evans shows how to revitalize your prayer life by connecting your needs to a specific divine characteristic. 144 pages

Click to Shop Christianbook.com and
support CBJ, at no extra cost to you!
www.Christianbook.com


Join our Private Facebook Group
and “Get Involved, Be Inspired”
www.facebook.com/groups/CbibleJ/